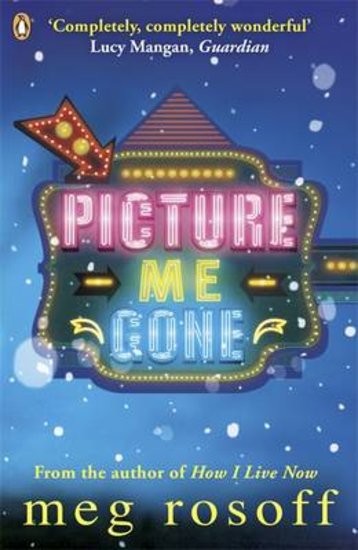 Picture Me Gone is the compelling new novel by the author of How I Live Now, Meg Rosoff. Mila is on a roadtrip across the USA with her father. They are looking for his best friend but Mila discovers a more important truth. Sometimes the act of searching reveals more than the final discovery can. Adults do not have all the answers. It all depends what questions you ask. A brilliantly atmospheric exploration of someone on the brink of adulthood, from prizewinning author Meg Rosoff, author of How I Live Now. This is a compelling read in the tradition of Meg’s acclaimed novels such as What I Was and Just in Case. “Completely, completely wonderful”. (Lucy Mangan, Guardian). “Nobody describes the strengths and pain of being young quite like Meg Rosoff …she excels at blending tragic events, comedy, philosophical concepts and love into unexpected and engaging fictions”. (The Times). “The only predictable thing about Meg Rosoff is that each book will be entirely different from the last…Picture Me Gone is a delightfully authentic slice of life”. (Daily Mail). “Picture Me Gone charts the tiny shifts in allegiance and unexpected situations through which the heroine discovers that the stories she lives by will not be enough for the pitiless, messy, adult world. In this finely tuned minimalist work, every detail counts”. (Guardian). “Printz Award-winning author Meg Rosoff’s latest novel is a gorgeous and unforgettable page-turner about the relationship between parents and children, love and loss”. (goodreads.com). “A great read”. (Mizz). “Rosoff’s talent is in writing believable, many-layered characters, and Picture Me Gone is a neat, beautiful little novel that unravels the ties that bind”. (Stylist (Stylist’s Top 10 Must-Reads)). Meg Rosoff became a publishing sensation with her first novel, How I Live Now, which won the Guardian Children’s Fiction Prize. Her second novel, Just in Case, won the Carnegie Medal in 2007. What I Was was described by The Times as ‘Samuel Beckett on Ecstasy’. Meg was born and grew up in Boston, USA, worked in advertising in New York and has lived in London for the last 20 years. She is married to an artist and they have one daughter.

Meg Rosoff was born in 1956 in Boston, USA. She studied at Harvard University and left for England in 1977 to enter St Martin’s School of Art, later returning to finish her degree at Harvard. She worked in New York City for 10 years in publishing and advertising, before moving to England.

She has written four novels for teenagers, as well as several picture books. Her first novel, How I Live Now, was published to great acclaim in 2004, winning the Guardian Children’s Fiction Prize, and shortlisted for both the Whibread Children’s Book Award and the Orange First Novel Prize.

Her second novel, Just in Case (2006), about a hunted 15-year-old boy, won the 2007 Carnegie Medal, and her third, What I Was was also shortlisted for several major awards. Her latest book, The Bride’s Farewell is her first historical novel, telling the tale of a nineteenth century girl who flees on the morning of her wedding.