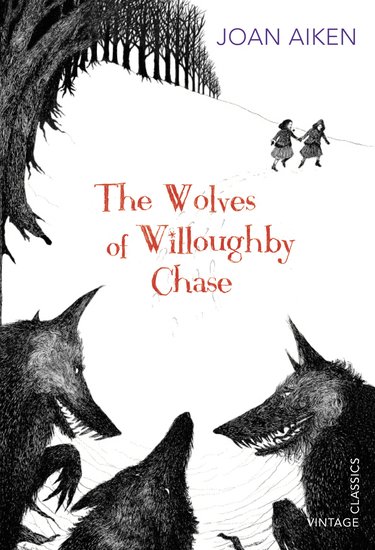 Buy this and your school gets $12.16 to spend on books

“Can you go a little faster? Can you run?” Long ago, at a time in history that never happened, England is overrun with hungry wolves. But as Bonnie and her cousin Sylvia discover, real danger often lies closer to home. Their new governess, Miss Slighcarp, doesn’t seem at all nice. She shuts Bonnie in a cupboard, fires the faithful servants and sends the cousins far away to a place where they’ll never be found. Can Bonnie and Sylvia outwit wicked Miss Slighcarp and her wolfish network of criminals, forgers and snitches?

Joan Aiken was born in 1924 in East Sussex. She didn’t go to school until she was twelve but she read hundreds of books and loved to make up stories. In her early twenties some of her short stories were broadcast by the BBC and she began to make a career out of her writing. She did lots of different jobs including working for the BBC, writing for TV adverts and magazine articles. Her first book was a collection of short stories called All You’ve Ever Wanted.

The Wolves of Willoughby Chase was one of the first full-length novels Joan wrote and was published in 1962. Originally written as a one-off spoof of the Victorian Gothic adventure stories Joan had read as a child, this book became the inspiration for the series of Wolves Chronicles that followed – a series of fantastic adventures set in her own invented world, a period of history that never happened. Joan was finally able to become a full-time writer and she continued to write books, mostly for children, all her life.